A new global reach to recruitment

Global competition among countries, companies and individuals has never been fiercer, and a recently formed Sino-UK recruitment joint venture illustrates perfectly just how well companies from different parts of the world can now operate together.Top Chinese and UK firms join forces to offer wider service to clients in every part of the world

The venture set up between China’s Career International and Antal International, a recruitment specialist based in the United Kingdom, is expected to see new offices opened in key cities such as Dalian, Xi’an and Hangzhou, to help Antal grow its business in China.

Under the deal, in which Career has a 51 percent stake, the two companies will strengthen their foothold in other international markets around the world, too, courtesy of Antal’s global connections.

Career, founded in the late 1990s, previously focused solely on headhunting, but that has now dropped to 60 percent of its total business, with 75 percent of its clients now multinationals, including major Chinese names such as Haier, Huawei and Lenovo.

It is strongly represented in 40 locations across Asia, says its chairman Gao Yong.

“We follow the footprints of our clients, and have opened five offices in Southeast Asia, just to meet client expansions in the region,” he says.

“But many of our Chinese clients are now reaching out to the European market, and this is the key reason why we choose Antal.”

Career has recruited more than 1,000 people a year for the past eight years for a major US-based client.

Founded in 1993, UK-based Antal is considered one of the country’s top management and professional recruitment specialist, but crucially it also claims to be one of the first to devote substantial resources to emerging markets, and now has 135 offices in more than 30 countries.

It has been operating in the Asia-Pacific for nearly 17 years, and Antal China already has offices in Beijing, Shanghai and Hong Kong.

While Career is going global in its search for top talent, Antal is focusing on the fast-growing Chinese market, and it is that two-way direction of their ambitions that attracted the companies to one another..

Earlier this year, traveling in Hangzhou, Zhejiang province, another city in which a potential joint office is now planned, Goodwin says he was surprised to find that its 8.8 million population was served by just 20 recruitment companies.

A comparative city in the UK could expect around 2,000, he says. 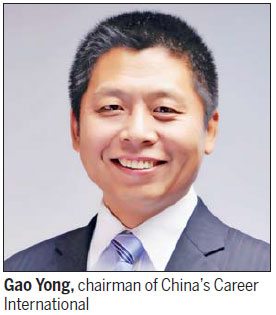 “To continue this development process, we had to partner with a Chinese company. We found we really needed each other, and the two companies hit it off immediately.”

Around 20 percent of Antal’s business comes from what are considered local clients, with the rest coming from multinationals, but Goodwin says the local element has grown much more strongly over the past five years, especially in third and fourth-tier Chinese cities.

“When we arrived in China in 2000, young people wanted to stay in large cities such as Beijing, Shanghai and Guangzhou after college; but now that has shifted, and more prefer to return home to work, where living costs are cheaper and competition is much less.”

And it is not just local recruitment by local firms that is growing fast; multinationals are also increasing their staff in China.

“When a multinational wants to expand in China, it doesn’t want to bring people from the UK or from the US, but find people who have expertise in the local market,” Goodwin says.

“Previously, if our clients wanted us to recruit a local manager in Amsterdam, it was very difficult for us to find the right person; but now if that kind of demand arises we can contact our new partner in Europe and start the process immediately.”

The spread of sector expertise now available to both parties is also strengthened by the new venture .

The two companies previously concentrated on very different niche markets: Antal on fast-growing small and medium-sized enterprises in the healthcare, retail and IT supply chain, and Career on the finance, consumer products and medical devices sectors.

Business for both sides is now more “complementary than competitive”, Gao says.

Goodwin says there has been “a flux of talent coming into the UK”, and many Chinese students are still studying in the UK.

“Many prefer to work in a Chinese company in the UK or other European countries, so Career and Antal can join in serving these groups, for instance,” he says, adding that the line between local and imported talent continues to blur.

“We have already seen major Chinese companies buying or taking stakes in leading overseas companies – Lenovo buying IBM laptops, for instance, and Geely buying Volvo – and we expect to see many more Chinese investments in Europe.

“People now care far less about where good managers came from, and more about their ability to do the job.”

Both companies say they realize too, that modern recruiting, especially internationally, is a more precise process than in the past, when often the only requirement for clients was to fill the vacancy as quickly as possible.

Now, as well as finding the right person, companies want to make sure their brand is protected and promoted throughout the recruitment process, and that takes specialist skill.

Gao uses the example of one of Career’s clients, who insists on collecting feedback from job-seekers – successful or not – asking whether they felt comfortable during the process, and how that could be improved.

In the 1980s, job adverts printed in newspapers, or even posted on billboards, noticeboards or street lights or power poles were the norm; in the 1990s, job fairs dominated the recruitment sector; but today it is all about using the Internet to best effect, and in China that means understanding how to market through social media such as Weibo and even WeChat.

Two other significant changes have seen the recruitment process becoming more detailed, and more companies outsourcing the function, with all stages being handled by professional recruitment firms, including language tests and job interviews, even salary negotiations.

“In a traditional company, the human resources department used to take charge of these duties,” adds Gao, “but companies need to recruit human resources staff first, before they can recruit others.

“When an economy is strong, that’s fine, but when it slips, often the first thing to get cut is staff, maybe even HR staff.

“In a fluctuating economy, recruitment staff can change often, so many companies have found the more economical and efficient way is to outsource this function to specialized companies like ours.”

The Duke of Edinburgh’s Award

Kevin Green sits down with Tony Goodwin, the CEO and founder of Antal International. Tony talks about the ups and downs at the helm of Antal, which went on to become the most successful recruitment businesses in Central and Eastern Europe.